"Well, here we are. A bit of King Crimson 2014. One should always be wary of coming to judgement about anything based upon a clip that lasts less than a minute and a half but, but, but... Taken from the rehearsals in Elstree Studios, this snippet has four of the seven-piece Crimso clearly enjoying themselves. Thereâs a wealth of back and forth interplay detail between Reiflin and Harrison and of course Levin and Fripp not only grab the lapels but go straight for the jugular. Oh, never mind about the rush to judgement: this is King Crimson and theyâre on fiery form!"

http://www.hollywood.com/news/brief/572 ... imson-fans
He's seen too much of life,
and there's no going back...
Nach oben 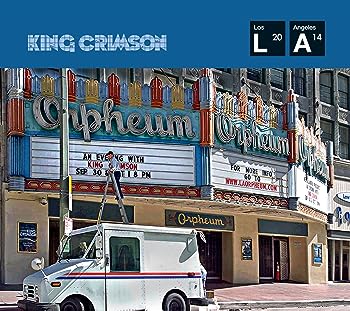 
VÃ: 10.04.2015
Club 1: Live at The Marquee, 1969 is a single CD set of an audio restored bootleg by the first King Crimson line-up the day after they played with The Rolling Stones in Hyde Park. What it lacks in audio quality, is more than made up by the power of the performance.

On July 5th, 1969, King Crimson played to upwards of 500,000 people on a bill topped by The Rolling Stones in Hyde Park, London. It was a pivotal point for the band. The next evening, King Crimson played their regular club date - a crammed Marquee Club in the same city. Recorded by an audience member, the original tape of the concert found ist way to Robert Fripp & DGM many years later. Extensive audio restoration was applied & though itâs still never going to be a âhi-fiâ experience, as one of the earliest live recordings of the band, it has been a consistent seller for DGM for many years. Pre-dating the release of âIn The Court Of The Crimson Kingâ by more than three months & showcasing material from that album, the tape captures the raw power that had already made Crimson Londonâs hottest new band. Also included is the only known recording/performance of âTreesâ from October 1969. While the audio quality of this recording is poor & no amount of restoration can improve upon that, ist rarity earned it a place as a bonus track.


VÃ: 10.04.2015
Classic King Crimson live show from 1971. Previously only available mail order via the DGM website. Club 46: Live at The Marquee, 1971 is a double CD & possibly the best discovery in the history of the Club series - a wonderful concert featuring the Islands era band at the time of the recording sessions for that album.

One of the more pleasing outcomes of the ongoing King Crimson 40th anniversary releases was the reception & re-evaluation that was afforded to 1971âs âIslandsâ album. Long over-shadowed by the live reputation of the 1969 line-up that preceded it & the 72/74 line-ups that followed, the band had, up to that point, been under-appreciated. This soundboard recording, discovered in the DGM archive in 2012, confirms that the 1971 band could match any King Crimson line-up before or since for a quality live show. In the middle of the recording sessions for the âIslandsâ album, the band returned to the legendary Marquee Club for two special concerts (quickly extended to a third night). Taken from the second night, this recording captures a relaxed performance featuring material from all three of King Crimsonâs released albums & early live recordings of much of the âIslandsâ material. This is the only line-up in King Crimsonâs long history that has, to date, performed material from the first four studio albums. Itâs a key recording in the King Crimson catalogue of live releases.


VÃ: 10.04.2015
Club 24: Live in Guildford, 1972 is a single CD of the best recorded soundboard from the quintet line-up with Jamie Muir - previously on the (now sold out from Transworld) Larks' Tongues in Aspic boxed set & featuring one of the band's longest & best improvs.

Classic King Crimson live show from 1972. Previously only available mail order via the DGM website or as part of the âLarksâ Tongues in Aspicâ boxed set. Available for a limited period. The reputation of the 1972/74 King Crimson line-ups comes from shows such as this soundboard recording of the band. Having formed in July of 1972, the band played three nights at the Zoom Club in Frankfurt & recorded a TV performance for Beat Club Germany in October prior to embarking on a full UK tour. This was the fourth concert of that tour & features material from the album that would become âLarksâ Tongues in Aspicâ when recorded the following January, alongside one of the bandâs fiercest (& longest) improvs. This is the best known concert recording of the short-lived, legendary, quintet line-up.

Tracklist:
1. Larksâ Tongues in Aspic (Part I)
2. Book of Saturday (Daily Games)
3. Improv: All That Glitters Is Not Nail Polish
4.Exiles